I happened upon this little cutie at a public fishing spot where her Amish family was having a picnic. The parking is literally 15 feet from the picnic tables, but as I have said before the Amish have very good radar for photographers, and I did give my best performance of acting uninterested in them, but the dad was glancing at me every two minutes,so I knew his spidey sense was tingling. The little girl made eye contact at one point and I smiled at her which seemed to keep her fixated on me. I played a little peek a boo from my car and got this cute shot of her as she reacted.

This image was captured right before Easter and it has a funny twist to it. I was heading home from work and this old truck which had been sitting in this pasture for a couple of weeks usually did not draw my attention. Well out of the corner of my eye, I saw something on the hood and did a quick u-turn to hopefully capture it before he jumped down. I think I must have taken photos for an hour hoping he would do something funny and there were a few opportunities.

First he laid down right in the middle of the hood becoming  a rather large hood ornament, then he started trying to eat the new buds on the trees and he was having a great time till his reach had consumed them all. He brainstormed a bit and inched ever closer to the edge of the rounded sides and despite almost slipping off several times, his sure-footed abilities prevailed. The entire time I was capturing him, I only saw two baby goats roaming, that is up until he went to the next level, which was the roof and started eating those branches. He did that for 5 minutes and then decided it was time to get down,so he jumped into the bed of the truck and to my surprise there were more goats that were there sleeping the whole time. The one on the left jumped out immediately, the brown one looked confused by the sudden awakening and the big one hopped back up to show who the king of the mountain is. The truck has since been absent from the field and I just wonder if someone out there has seen three goats cruising the back roads in an old ford. Too bad it wasn’t a Dodge Ram. 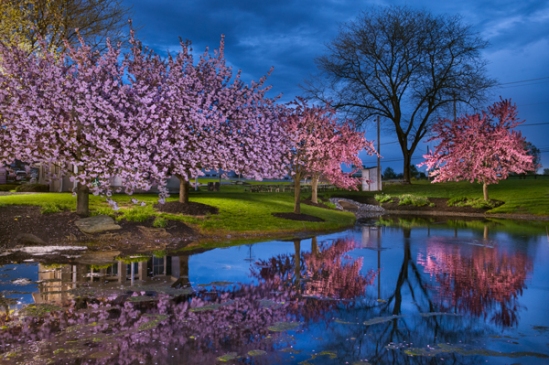 I always seem to pick the wrong time to go out, and this was shot the other night as rain started moving into the region. I started shooting about 30 minutes before and then it started raining ruining the reflection. Then I noticed there was a circulating pump that came on and rippled the water even more. I thought to myself I can outlast that pump and sure enough 30 minutes later it stopped and a nice reflection emerged. I added light to make the trees pop in the water. 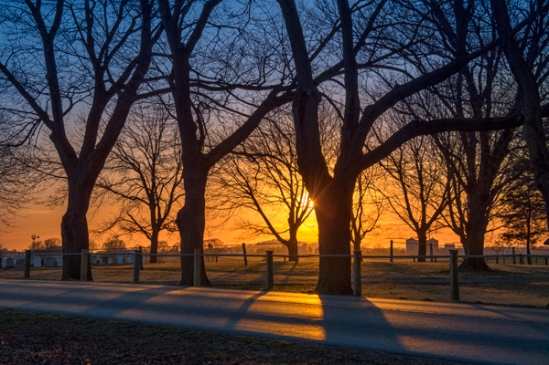