As you can see in this photo,Dr Whitey Hoofmeister was hard at work giving adjustments in the barnyard recently. While he is just a young doctor, the skill he displays with his furry hooves is second to none they say. This particular patient needed an adjustment in the lower back after an intense head butting session with a rival. Notice the zen like concentration on the doctors face as he manipulates his client.

Sometimes being the biggest has its disadvantages,as in this instance when the goat uses you like a  doormat to get a better angle on a free handout. I spotted this totally unrehearsed scene playing out at an Amish produce stand that included coin operated food dispensers for the barnyard animals. The tourists love the opportunity  to experience country life for a brief moment. The donkey did not fuss even one time while the goat rode around on his back, so maybe he was getting a free massage out of the deal. 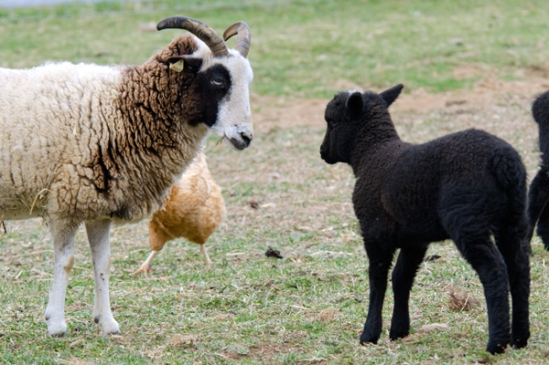 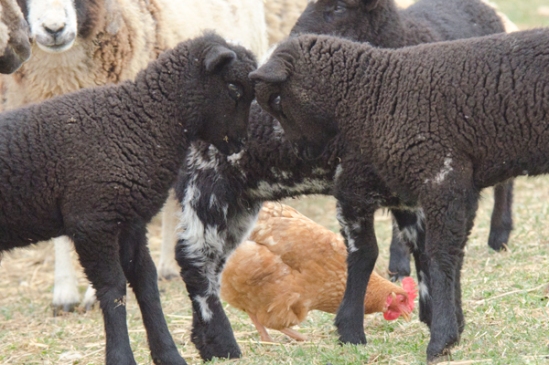 Sometimes You see things that you just wish you had on video, but unfortunately I can only share a few stills from some shooting today. The scene unfolds in the pasture with photo number one featuring the mature goat being confronted by the new kid on the block, and even though the youngster bobbed his head a few times to show how brave he was , the old-timer backed him up several times just using the evil eye, as if to say, do you feel lucky punk?. As this scenario unfolded, the chickens went running, as if to cackle, oh boy, there is gonna be a fight, we better get over there to watch the new kid get a good beat down, and then photo three has more spectators clamoring to get a good view of the showdown. The youngster finally thought things through, remembered he had no horns yet, and decided he did not need a good bump on his head from the old-timer, so he moved on to challenge more fitting opponents as shown in number four.

Today I realized that even at my age I can actually still learn something new. I picked this image that I shot in the last couple days to post here, and I assumed that since the adult goat had horns, it must be the father. As I was getting ready to write my description for the photo, I thought maybe I will google the possibility of a female goat having horns. Low and behold, they actually can have horns, so this is momma goat leading her three adorable little offspring across the pasture. They had a little episode with the large Llama from yesterdays posting, and for whatever reason that barnyard bully kept antagonizing and chasing the mother goat, so she would give the all hands on deck call to the youngsters, who would follow mom to a spot of protection. It’s interesting how one is white,one black and one a combo. 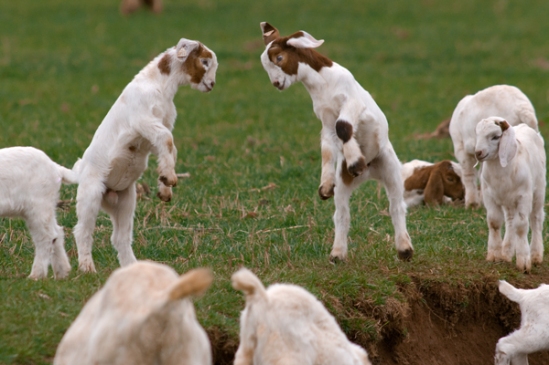 Well this is the time of year when the newborn critters make their appearance, and usually warm weather brings out the playful side in them. These baby goats were full of energy from the warm sun, and a good round of head butting was just what they needed to do to burn off some extra energy. It’s always funny watching them size each other up, and then rise up to give a good smack to the nearest competitor. This was one of those rare times when the recipient was ready to fire back. 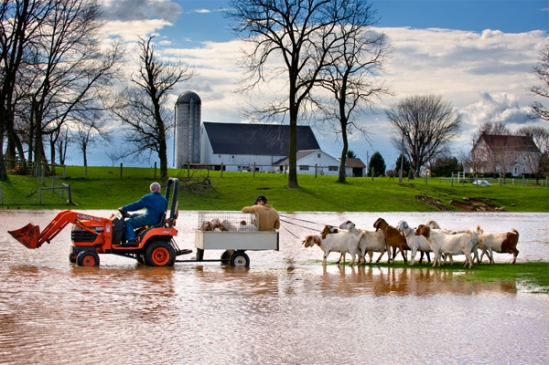 We had a decent amount of rain over the last two days,so my mind started thinking about all the heavy storms we had in the last year, and this image came back to my memory. What appears to be a lake, is actually a field for this herd of goats, and over near the green grass there was a tiny stream that severely overflowed its banks. As the goats were down to their last few feet of pasture, the owners came out with the tractor and cart. They loaded the young ones in the wire cages, and persuaded the nervous parents to follow them to higher ground. It was comical to watch, but the waters were still rising,so they got out at just the right time.