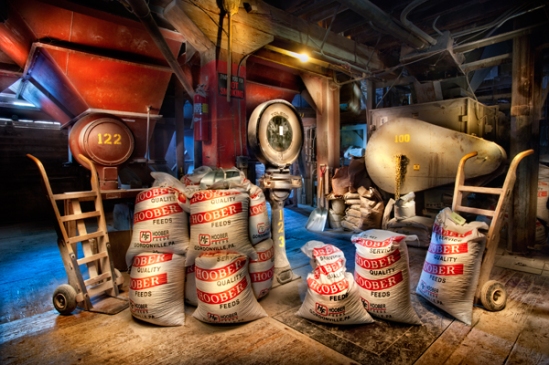 This image was taken at the feed mill that I had photographed and featured on my blog a few days ago. I met Brad the owner, and he graciously allowed both myself and fellow photographer Larry the chance to look around inside. After the mill shut down for the day, we broke out our gear and we each selected an area to light paint. Admittedly it has been a while since I gave this technique a try, so I struggled a bit as I worked to light the room with my spotlight. The mill is a real labyrinth of metal and wood, and left me wondering how such a place is designed. The inside also included numerous cats roaming about, which surprised me with all the machines at work, but after I had witnessed a cat catch a mouse three feet in front of me, it all became clear very quickly. The area I chose included the old scale with the two feed bags on it, along with another scale facing the opposite direction with the number 122 on it. The blue light is coming from window light that was shining in at dusk. We usually work in the dark, but time constraints had us shooting earlier.