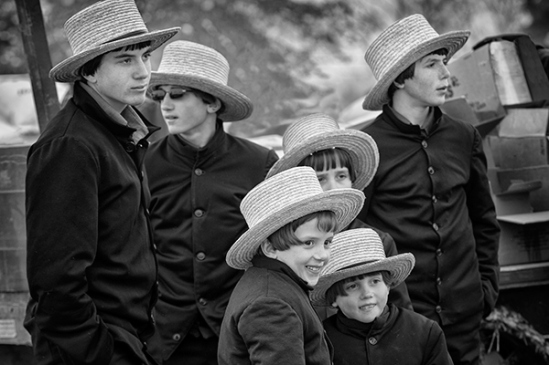 Yesterday I posted the six boys looking the same direction and after reviewing my images from that day,I realized I had another image of them earlier in the day. This shot stands out in my memory because of the shot I missed right after this one. Whenever I attend events like this were Amish will be attending, I try and lay low below the radar and I try to capture spontaneous moments using long lenses. I snapped this image and immediately looked away to not draw attention to myself but as I glanced back at them I saw the smallest boy had both his thumbs against his cheeks with his hands stretched open and his tongue out as he made the funny face at whoever they were looking at.I no sooner started to lift my camera and he was finished with the show,and I can only imagine the unique shot I would have gotten. The Amish are generally conservative but I do occasionally see glimpses of things that reflect what the rest of the world does and these were just boys being boys.