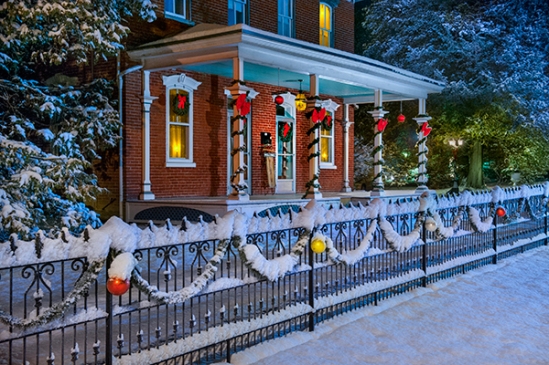 This old home is one I pass quite often and I have photographed it a few times over the years. I was at an auction a year or two ago and saw this fence coming on the auction block but it was all rusty and despite that fact I thought I would still bid up to $500 on it? Well it shot past that so fast I knew it was hopeless but I recognized the one bidder as the owner of this home, so I crossed my fingers he would get it and lo and behold he did. He had some serious work to get it this nice and when I saw the snow hanging on it, I felt it just needed to be captured. One huge problem here is it sits right near the road and there is one of those super reddish/amber street lights glaring down, so fighting that terrible color cast is a real challenge. I shot this in the dark except the ugly street light shining on everything. I hope I can get something even nicer this winter so I can include the ornamental gate but the snow was better in this area so I opted for this angle on this visit.