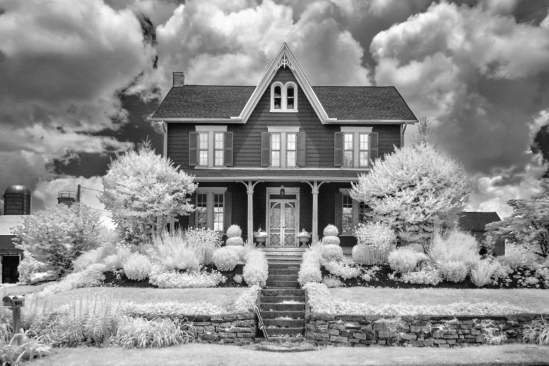 Let me start by saying the following actually happened to me a few years ago at the home I just photographed in infrared. It all started with a phone call I received asking me if I could go check on a co-worker that did not answer the phone. I said sure I will go and see if either he or his wife are there. When I got there, a police officer was there and told me he had passed away. I asked if I could go in to talk with his wife and he said sure,no problem. I head on in and his wife who was starting with dementia greeted me in the kitchen. She was standing leaning on the refrigerator and I was on the other side of a large granite island. We talked a bit and I was getting a little exhausted processing it all, so I leaned my arms on the island and as I leaned forward there was my co-worker still on the floor where he dropped?  It definitely threw me a bit but then his wife started asking me why he will not wake up when she shakes him?

So the funeral  is set and since he always liked my New England photos, I decided to do a tribute slide show with music at the viewing which was very much appreciated by the family. We finish up and everyone heads home after dark and since we were starting to seal our basement with drylok, I headed down to start doing the next wall. I was on a short ladder working hard to work the drylok into the block wall when I heard three taps, so I yell up to my wife, what do you want?  She yells what are you talking about, so I said never mind and continued on. Maybe a minute later I hear three taps on the door glass leading out to a set of steps that go up and outside. As soon as I heard the taps, My head immediately spun around to look at the door and I was literally looking right at my co-workers face in the window who had passed!  Now you may think someone was playing games, but that very stairway that leads to the door is covered by a deck made of 2×6 treated and trex that takes all I have to lift up and go down those steps. I was in such a mindset that I did not tell my wife about it, thinking maybe I had an overactive imagination? Well the next day comes and after my wife gets out of the shower, she comes to the bedroom and says what was with the three taps I just did?  I said I did not tap and she just laughed and said “yeah right”. Well day 2 comes and sure enough we both hear another set of three taps, and after pausing a moment I yelled his name, told him we missed him, and said you have got to move out please. Thank the Lord that was the last time for any tapping.

I found it ironic that the infrared shot has the windows looking like they are fully lit rooms inside. I looked at the original file and it looks like the windows were new UV glass that had a blue tint, which goes white with the filters.

2 responses to “A True Life Tale!”