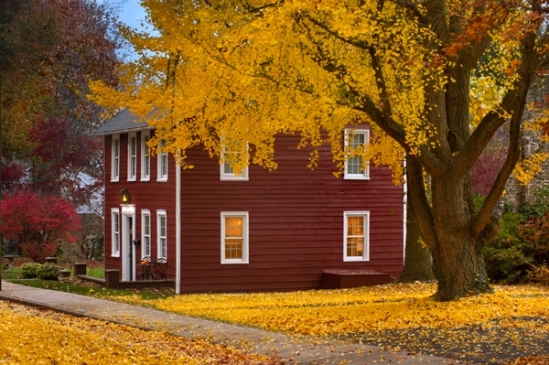 The other night I elaborated on my interaction with the gentleman who overreacted to me ringing his doorbell, and tonight we bring it full circle with yet another installment of “The Photography Chronicles”.  I was headed to work the very next day after the Church debacle when I spotted this pretty Ginkgo tree beside this home that reminded me of homes in New England. I skipped lunch this day and hopped in my truck for a quick attempt to get something before storms took everything down. As you may have already guessed, yes I once again walked up to the door and rang the bell!  As I approached the door I could hear several people talking just inside but as soon as I pushed the doorbell, nothing but crickets?  So I thought well I at least tried and despite not being able to walk on their driveway, I was still shooting this pretty scene from the street! I shot one or two angles and glancing down the street I notice a cop car coming up the road?  I think routine patrol most certainly and as he passes I wave and he continues on, until he gets to the end of the street and turns around! He pulls up and asks what I am doing, I explain shooting fall foliage and he says someone with a security camera called in. As we were talking I looked at the name on his badge and a little light bulb went off from the Church photo fiasco the night prior. I said were you on duty last night, and no kidding, he says are you Donald Reese?  I said yes you called my house last night and now you show up again?  We both found it slightly amusing that two homes with cameras felt the need to bother police for something so innocent but I understand stuff does go on that needs checked out. All I can say is thank goodness the leaves are down so I wont be tempted to shoot more fall foliage.

I try to be respectful when situations like this arise and I know police work is a balancing act, but I have seen a photographer friend of mine on a couple occasions tell a cop its basically none of his business what he is photographing in a public area. One time we were on a back road snapping sheep/lambs in a small shelter just beside the road and a cop pulls up and asks what we were doing. My buddy gave a response that I don’t know word for word but it was basically to the affect that its none of his business what we are doing taking photos of sheep, to which he shrugged his shoulders and drove off.