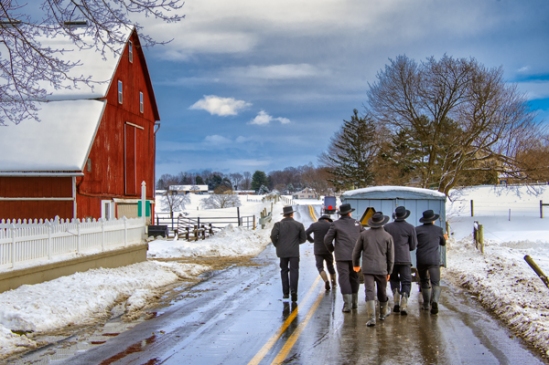 I was driving looking for photos recently when I came down a hill and saw some Amish buggies heading out from a farm on the road I was ready to turn onto. I had heard that Tuesdays are a traditional wedding day and this was in fact a Tuesday so I thought this will a happy occasion. So I drive by carefully and just as I approach the main entrance, this crew of Amish young men come barreling out the lane onto the road pushing this giant wagon that they use to haul chairs, benches and what not to various farm gatherings. I had to stop for them and then a little voice said there is a photo op right in front of you! Since I was stuck there I put it in park and opened my door to get a good angle and I took several quick bursts as they moved down the road.

So I was almost done when I heard a voice 30 feet behind me say, ”okay lets move it on now”?  I usually stand my ground when someone thinks they are going to force me to listen to their orders but this guy was different and asked in a nice friendly tone. I gave him a puzzled look and he informs me there was a funeral here today?  I said I thought it was a wedding and he said I thought that might be the case. I said sorry and made a hasty departure. He must have been a driver who hauls Amish around in a van because he said he never saw anything like this before. Anyway I still like the image I captured on this snowy winter day and the men were laughing as they were pushing the cart so that didn’t exactly help in my decision to shoot.

8 responses to “A Slight Miscalculation”