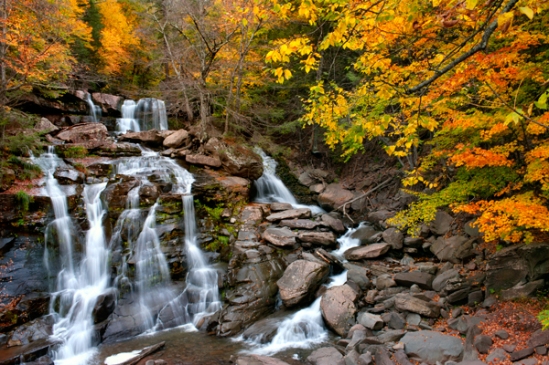 This is lower Kaaterskill falls in the Catskills of New York. We came down the road,saw there was two spots for cars and quickly parked. I thought how lucky we were to get the second spot until I heard the State Troopers Siren chirp directly behind us. I look and he points at a sign directly above our car that says absolutely no parking. We never saw it and he was nice enough to just warn us,so we drove up the road to a parking area and I had to walk a hundred yards or so to get the shot. There is a more dramatic falls up the hill from this but after I started the first thirty feet climb over boulders,I basically decided I did not have it in me with my gear along.

This is an old mill I photographed in Weston Vermont on my fall foliage trip. Thankfully it was not overrun by tourists and we had the place all to ourselves. I shot it in sun about an hour before and thankfully my friend was patient enough to drop me off for another shot after sunset. The Vermont country store is a stones throw away,so my buddy went there to shoot while I was here. I took my hip waders along and without them,I never would have been able to access this vantage point. Crossing streams that are around a foot deep is always nerve-wracking when you are carrying your gear along. 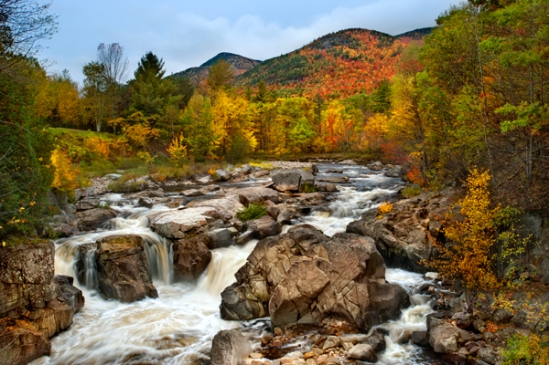 This falls called the flume is located along a scenic stretch of road about ten miles outside of Lake Placid. As I get older I seem to be getting a little less brave or perhaps wiser,but on this morning I decided to navigate my way onto a hard to reach rock outcropping to get this shot. To get this shot,I left my camera bag in the woods,carried only my camera and tripod and clung to several trees as I descended a hill.Next I crawled on hands and knees along a two foot wide rock ledge that included low hanging roots brushing my back.I took my sweet time getting there because any mistake would put me into the raging water,which included more nasty falls just downstream. Getting there right after sunrise insured I would hopefully be there alone,which I was.The water was flowing pretty strongly,so extreme caution was in order.Fall color on the mountain provided a nice backdrop.

Several people told me they enjoyed the stories of my Maine escapades, so due to the fact I am behind on processing new images, I will share another story and image. Several years ago, I asked a friend if he wants to travel to the Poconos in Pennsylvania to shoot some fall foliage and a few waterfalls. It was a lovely fall day and we arrived to see perfect conditions for shooting. The location shown here is called Silver thread falls and although it’s not the most photogenic, it is among the highest at 80 feet. I was shooting film at the time and this image was snapped on the way to the top of the falls. We took the trail all the way to the top, and upon reaching this point, we were greeted with an overlook of sorts that included a rail fence. I took one look at the fence and decided I was having none of it, and immediately reached over the railing to set my loaded camera bag on the ground on the other side. I then turned to my buddy to say something, only to hear a small bumping sound, which was my camera bag headed down the embankment to the flowing stream. By the time I jumped over the fence, my bag was already heading downstream toward the top of the waterfall shown here. Without hesitation or thinking, I jumped off the bank from about 6 ft up and splashed into the water,which was about knee-deep and grabbed my bag. I made my way to the water’s edge real quick, opened my bag which was buckled shut, and of course every lens,camera etc was totally filled with water. I remember being so upset at my own stupidity as we drove home, as I held my lenses out the window to try to dry them.

The funny moment came when several hikers came rushing up from down below to the top of the falls to find me soaking wet, and told us they thought someone was committing suicide when they saw me jump. As I settled back down after the incident, I realized how dicey the situation was and how it could have gone downhill pretty quick. I was maybe 10 feet from the edge of this falls in fairly fast water, so one slip on a rock and both myself and my gear may have taken the express lane to the bottom. One thing I specifically remember after I got home was that my parents owned this kitchen device that cooked food with cyclonic heated air, which basically was air spinning incredibly fast inside this circular contraption. My 80-200 that would not dry for days, suddenly dried out totally in about 20 minutes in this thing. It was too late anyway, but it absolutely worked to dry the water out. This image is one of the few that survived because they were already in film canisters that stayed dry that day