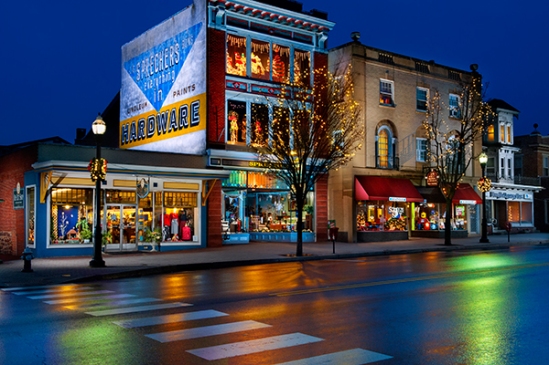 This scene is located in a nearby town and the tall store in the middle used to be a well-known hardware store but it closed a few years ago and is now home to a home furnishing store. The new owners gave the community a Christmas treat by decorating the large windows on the upper two floors. For the last few weeks I struggled to come up with an angle that would showcase it but after it rained the other night and the road turned reflective,I knew the shot had just revealed itself. Sometimes I can be a bit obsessive about trying to get the perfect shot and because this is a main thoroughfare , it rarely is ever car free, so when I saw the shot without cars, I immediately went to work capturing it.

As I mentioned one of my character flaws is aiming for perfection all the time and it can be something that drives people crazy but I always thought, do it right or don’t bother. Anyway the reason I bring this up is because the sky was pitch black the night I first tried this shot and as I lay in bed that night,all I could think was how nice it would have been with a blue sky? So as you guessed I got up the following morning before dawn and figured there was going to be cars parked there and my one chance was passed to get it,but lo and behold the street was still bare and as a bonus it was even wetter than the night before.I lit all the buildings while it was dark and captured the sky color as daybreak arrived. The hardest part was getting my flash on a pole high enough to illuminate the hardware sign on the wall.

18 responses to “Beauty of Light”