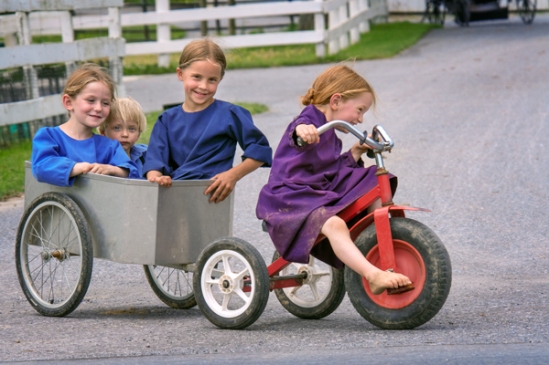 I was coming down a local backroad yesterday and up ahead I noticed an Amish farm stand and there was a buzz of activity focused in one area beside the road. Luckily there was another business straight across the street where I could park unnoticed for a while. There were kids, teens, and adults all filling pots with soil that were then lined up in rows in a growing area. I may be wrong but I think they were the beginnings of fall mums because this same location has had a large crop of mums in this exact spot for several years. With that being said, I watched all the activity around the farm for photo ops and I noticed way back the lane there were some youngsters playing with this tricycle/cart setup. I was quite frustrated because they were about 75 yards away and my longest lens was still not able to reach them so I waited and hoped.

Before long they disappeared behind the barn but a few minutes later they reappeared on a lane that went around the barn in a U-shape. I watched as the came almost to the road and then rode away again and I thought well you missed your chance. I then drove to the opposite end of the lot and there was exactly one spot left and guess where it was located?  You got it, it was straight across the road from the lane they were playing in!  I watched as they came toward me and rode away and tried my best to look disinterested and on the third trip, I brought the camera up and got this image as they turned to go back. What was funny was how they were having such a good time as I snapped this image but I think it finally registered that I had a camera and then they became much more elusive. They would dart out and make funny faces and quickly retreat but they were having fun hiding and reappearing. I keep looking at the image trying to figure how three kids fit in that little trailer. It has been a long time since I took any Amish photos but shots like this remind me why I enjoy capturing moments in their lives.