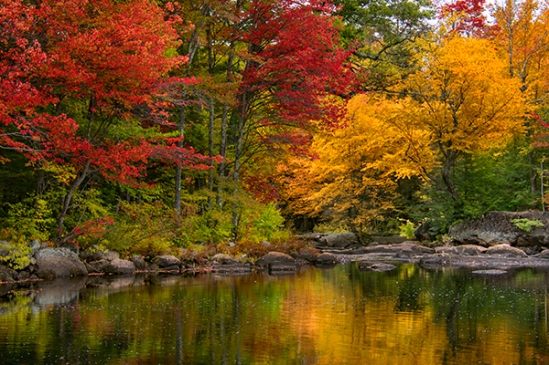 This image was taken on the last day of my four-day trip up to New England and of course it was the best day for foliage that I had the whole trip. I drove 18 hours this day,starting at 5am in the far northern regions of New Hampshire and ended in Pennsylvania at 11pm that night. I was driving rt 9 in New Hampshire and literally stopping every 5 miles because the color and scenery were so nice,and I noticed this bit of color along the creek,so I turned off the road and parked.As I was parking,I noticed a group of three young indian teenagers who were speaking their native language and snapping a few photos and I said hi as I approached,and just as I got past them,a huge stick about 4 feet long and maybe three inches thick flies by about two feet in front of my face? They start laughing and yelling over the edge of the bridge we are on and then explain they had a fourth friend down below in the stream who was trying to hit them. Since I was carrying my camera on the tripod in front of me,I was not very humored by the explanation,which by the way came without any apology. After the stick incident I headed down the bank to the creek below and captured this image that I really like and thankfully I was able to capture such a serene scene.