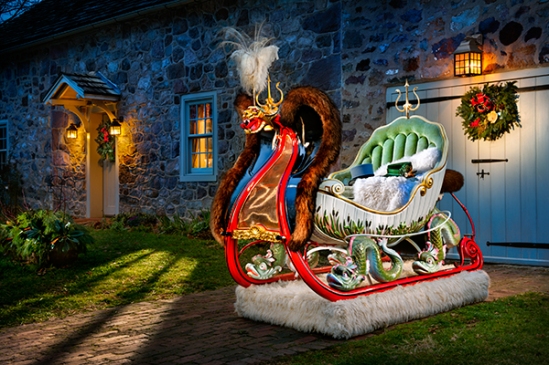 This beautiful antique Russian sleigh was generously loaned for display at the Ironmasters Christmas event which is held every two years. I have been blessed to be given access to shoot different displays at this mansion event over the years and when I saw this sleigh, I could not stop thinking about trying to capture it somehow. This Russian sleigh is one of a kind and obviously the owners are very protective of it and that is why it was displayed inside the one building which made it next to impossible to capture, but after reassuring the owners it will remain anonymous they agreed to let me try to photograph it after the show was over and they were ready to load it up. It seems as I get older I have come to appreciate things that I consider works of art that were made by skilled craftsmen and when I compare what we do today to those of olden times, we fall miserably short for the most part.

The sleigh was made by Brewster and Company of New York in 1893 and was made specifically as an exhibition piece to showcase the company’s skill at the Worlds fair in Chicago that same year. The Brewster company had an international reputation for making some of the finest horse-drawn vehicles and were in the London exhibition in 1862 and the Paris exhibition in 1878 as well. This particular sleigh was made for the Columbian exhibition in 1893 and was awarded a prize. It was later purchased by Albert Moore of Philadelphia for $2,500 dollars and it weighed 515 pounds and was trimmed in pale green silk plush. Old archives also list it as having arctic fox foot rugs, bear fur edges and carved dolphins,which to me look like dragons,but it was explained to me that was their perception of dolphins back then.

The entire body is carved to resemble a shell with cattails and it took 6 months to build,with the carving taking five months alone.If I recall my conversation with the owner correctly,I believe he related to me this sleigh was found in an outside garden basically being consumed by mother nature. It was meticulously restored to its original state and is once again a true one of a kind work of art. I wish it could have been captured without its rug base but that is permanently attached to facilitate easy moving. If you notice there is a screen material to see out the front and there was a driver who sat behind the royalty or distinguished passengers at the back of the shell area. I can picture this coming down some snowy wooded lane outside St Petersburg as the castle reveals itself in the distance. I am sure this could be created today,much like it was back then, but then folks would have to put down their all important smart phones and stop relaying every nuance of their self-absorbed lives on Facebook,so for now I guess we will just have to appreciate what is possible by seeing what people from the past did when they committed time to their God-given abilities and devoted their efforts to something of value. I know I am getting old when I rant about technology and its effect on our society.

For the image,I blasted my flash out the window to get the light on the ground and then used my deer spotlight to light paint the sleigh. This building is where the sleigh was displayed and this was shot just before it got loaded on the trailer,and the owners were very understanding of my passion to shoot this thing and gave me ample time to accomplish my goal.